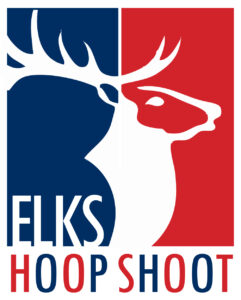 The Elks National Free Throw Competition, better known as the “Hoop Shoot” has been in existence for nearly 50 years, and offers young people age 8-13 an opportuntity to test their basketball shooting skills against others of their own age. Contests are held by Local Elk Lodges, and winners advance to the District, then State, Regional, and National Contest.

Below are the rules for the competition:

1. A contestant may only enter one Lodge Hoop Shoot contest.

3. Regarding eligibility, the Director is responsible only for ensuring that the contestant competes in the correct age-group. Use the Age-Group calculator on the Hoop Shoot website elks.org/hoopshoot to verify age-group assignments before your contestants compete. Contestants who shoot in the wrong age-group will be disqualified.

4. As the Hoop Shoot tournament progresses, contestants may not switch divisions and may not skip levels of the competition. In order to be eligible to advance to the next level of competition, a contestant must have participated in and won the previous level.

5. Contestants will compete in one of six divisions:

2. Shooting positions will be drawn randomly. The method is left to the discretion of the Director.

3. All contestants should be allowed 10 minutes to warm up. Warm-ups should take place under the supervision of the contest officials.

7. The line judge should signal made or missed shots to the scorers.

8. Decisions by , line judge, and Hoop Shot Director are final. No spectators, because of their count, can change the Head Scorer’s decision.

9. Contestants cannot take more than four controlled bounces between shots. If the ball is bounced more than four times, a penalty occurs and the shot is void. See Rule 12.

11. Contestants must stay behind the foul line until the ball has touched the hoop, backboard or net. If a line violation occurs, a penalty occurs, and the shot is void. See Rule 12.

12. In the event that a foul is committed, the line judge will indicate it by signaling a “T” with his/her hands, signifying that a technical foul has been committed. This should be done in clear view of the contestant and three scorers. Scorers should note a foul with a circled “T.”

13. Ties will be broken in the following sequence: a number of five-shot sets; previous contest score(s) if applicable; coin toss.

During the tie-breaker, contestants will compete in the same shooting order as the regular contest. All tie-breaking shots will be made at the same basket as the previous 25.

In no way can a tie be broken in any other manner except by those described in Rule 13.

14. Any other indiscretion will be left to the judgement of the Hoop Shoot Director.

1. Only contestants, officials and scorers and the official photographer—designated by the Director if applicable—are allowed on the floor during the contest.

2. No flash pictures should be taken of a contestant while shooting for score except by the official photographer.

3. No one should be allowed to sit close to the basket or cause any disturbance while the contestant is shooting. If this occurs, the official must pause the contest and clear the area.

4. All persons attending the contest should sit on the side of the gym and maintain complete silence. Phones should be turned to silent or vibrate for the duration of the contest. In no way should spectators cause any commotion that will distract the contestant.

5. All contestants should maintain silence and in no way cause any commotion that will intentionally distract another contestant. Taunting or purposely distracting a shooter, as determined by the contest Director, will result in the disqualification of the offending contestant.

1. The Hoop Shoot Director sets the time, date and location of the contest and promotes the contest information locally.

Directors should ensure that regulation size balls are used and the required air pressure (7-9 lbs.) has been checked.

2. There should be three scorers at each basket to record the results on score sheets. Scorers should sit behind the contestants while they shoot. To avoid error, scorers should focus their attention on the basket, not the shooter, during the competition.

• Gym shoes are required.
• A t-shirt and pants or gym shorts may be worn.
• Basketball uniforms are acceptable, but not required.

• Have 7-9 lbs. of air pressure
• Have channels and/or seams not exceeding 1/4 inch in width
• Be made of leather or composite leather

In the Girls Division, all basketballs used should:

• Be regulation size (official) for girls/women – 28.5 inches in circumference
• Have 7 to 9 lbs. of air pressure
• Have channels and/or seems that do not exceed 1/4 inch in width
• Be made of leather or composite leather