WHERE IT ALL BEGAN

Beginning in November of 1867, a comedic singer by the name of Charles Vivian landed in New York from South Hampton, England. While settling into his new surroundings, he and a few other entertainers visited a tavern after one of Vivian’s shows and they discussed refreshments and who would pay for them. It was suggested that they roll dice to determine who would pay, but Vivian replied that he never handled the cubes. Instead, he offered them a new game. He called for the bartender to provide him with three bottle corks, and handed one to each of his companions, one of which would be the judge who would count to three. They practiced the trick of dropping his cork on the bar and picking it up as rapidly as possible, several times; the idea being conveyed to the initiated being that the last man to lift his cork was to buy refreshments. Vivian then gave the word, and the judge began to count to three. All three held their hands over their corks in readiness to pick up their cork quickly. Two of the three companions were in on the trick, but the third was unaware that he was being had. Upon the count of three, the third companion quickly picked up his cork, while the others just held their hands over the cork. The third companion held his cork and declared that he was the first to pick up his cork. But the others quickly informed him that he was also the last to pick up his cork and thus had to pay for the refreshments. The ”Cork Trick” became quite popular at the time as a form of amusement. In essence, it could be considered the first initiation of what would become the Jolly Corks.

Birth of the Jolly Corks

Also, around this time, the City of New York established an Excise Law, a temperance law affecting drinking on a Sunday. To evade the new law, devotees of the “Cork Trick” would meet and hold “social conventions” at a private residence. A small group of entertainers gathered and called themselves the “Corks” with Charles Vivian serving as the “Imperial Cork.” The gatherings began to grow, and the owner of the private residence required them to forgo their Sunday gatherings. New quarters were found, and the meetings continued. At the time, the object of “The Corks” was entirely social. One of the entertainers by the name of George McDonald was being initiated into the group enjoyed the “Cork Trick” so much that he called the group he had joined the “Jolly Corks.” In December of that year, just before the holidays, several members of the group had returned to their gathering place after a funeral, and McDonald suggested that the “Jolly Corks” become a protective and benevolent society. At a meeting held on February 2, 1868, presided over by Charles Vivian, McDonald offered a motion organize the Jolly Corks as a Lodge along benevolent and fraternal lines. The motion passed, and a committee was formed to investigate as to what to call this new fraternity. Vivian suggested something along the lines of a British organization called the Royal Antediluvian Order of Buffalos, but the majority felt that the name should be something distinctively American. One of the members visited the Cooper Institute Library, where he found a book on natural history. In this book was described the American Elk. An animal that was “fleet-of-foot,” “timorous of doing wrong,” and ever ready to combat in defense of self and the female of the species. The description appealed to the committee because of the animal’s admirable qualities, and it was decided to use the title of the organization as the Elk in the committee’s report.

Birth of the Benevolent & Protective Order of Elks

On February 16, 1868, the committee reported to the group of “Jolly Corks,” recommending that the name of the group become the “Benevolent & Protective Order of Elks,” and the recommendation was adopted by a vote of 8 to 7. Seven members voted for the name of Buffalo, but by a deciding vote of one, the name of Elk was chosen. Charles Vivian had voted against the Elk name, but George McDonald and seven others voted for it. Hence the Benevolent & Protective Order of Elks was formed.

New York City Elk Lodge #1 became the first Lodge in the country on March 10, 1871, after the New York State Legislature established the Grand Lodge of the Benevolent & Protective Order of Elks, soon after Elk Lodges were popping up all across the country. Today, there are over 2200 Elk Lodges, all sharing in the same purpose of fraternity, good fellowship, patriotism, and support of our nation’s youth, veterans, charity, and community.

Many Elk Lodges in the State of Maine were chartered in the late 1800’s, with Portland Elks Lodge #188 being the first. As the number of Elk Lodges grew in the State of Maine, many wanted to establish an association. In 1928, the Maine Elks Association was established, and the first President of the Association was C. Dwight Stevens of the Portland Elks Lodge #188. Since that time, the Association has brought the Lodges in Maine together to improve communications, promote the programs of the Order, and to support our charitable efforts.

One of those efforts began in 1977, when the association established a Diabetes-Hypertension Testing Van that traveled throughout the state, providing free testing and information to the people of Maine. The program continued until the State of Maine required licensing as a mobile laboratory and licensed healthcare providers to provide the services. The State also required the association to purchase liability insurance, and due to the logistics of obtaining qualified people to continue the program and the high cost of insurance, the program was ended in the early 2000’s.

In 1985, the Maine Elks Association adopted the Maine Children’s Cancer Program as another of its major charitable projects. The Maine Children’s Cancer Program (MCCP) is a comprehensive treatment center for children diagnosed with cancer and blood disorders. The program is based in Scarborough, Maine and is a part of the Barbara Bush Children’s Hospital in Portland. Each year, approximately 50 Maine children are diagnosed with cancer, and begin their treatments at MCCP. The program has more than 200 patients in various stages of treatment.

Since that time, the Maine Elks Association and its member Lodges have raised over $5 million dollars to help support the program. Each year, the association contributes an average of $200,000 to $300,000 dollars to the program through several fundraising programs. One of those programs is the Maine Elks Major Project Endowment Fund. A restricted fund that uses only the income produced by the fund’s investments to be contributed annually to MCCP. A combined fundraising and endowment fund check is presented each year to the program at the association’s annual State Convention held in May each year. 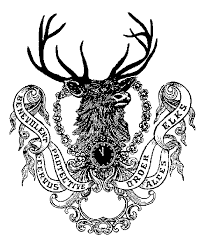 The elk is a peaceful animal, but will rise in defense of its own in the face of a threat. The majestic creature is fleet of foot and keen of perception. A most fitting representation, the stately elk is, for a distinctively American, intensely patriotic, family oriented organization subscribing to the cardinal principles of Elkdom, “Charity, Justice, Brotherly Love and Fidelity.”   The 15 Founders of the BPOE desired a readily identifiable creature of stature, indigenous to America. Eight members voted to adopt the elk, seven favored the buffalo.

Ten of the fifteen originators of the BPO Elks, 1868. 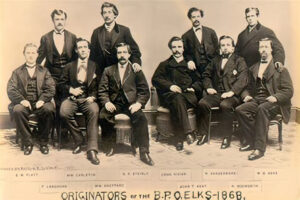