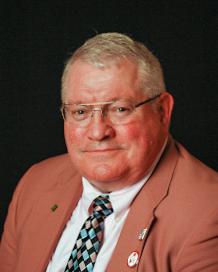 Andy was initiated into the Bangor Elks Lodge #244 in November of 1982.

He was appointed Chaplain in 1983, served on numerous Lodge committees and progressed through the chairs to become Exalted Ruler in 1986. He was Exalted Ruler again in 1993.

In 1998 he was appointed to the Grand Lodge Government Relations Committee representing all of Area 1. He served on that committee for 4 years acting as its Chairman during the last two years.

In 2002 he was elected to the position of Grand Inner Guard and served the Grand Lodge under the direction of then Grand Exalted Ruler Roger True.

In 2007 Andy was appointed as Special Representative for Maine North by then Grand Exalted Ruler Louis Sulsberger. He held that position until 2016.