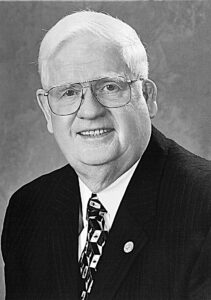 Amos A. McCallum, 78, of Saco, passed away peacefully with his family by his side on Monday, August 8, 2016, after a brief illness, at Southern Maine Healthcare in Biddeford.

He was born in Biddeford on December 21, 1937, the eldest son of G. Amos and Evelyn (Lahey) McCallum. He graduated from Old Orchard Beach High School, class of 1956. He also graduated from the University of Maine with a Bachelor’s in Education in 1961 and earned his Master’s in Administration two years later. Amos met his wife Barbara at the University of Maine and they were married in 1961.

Amos began his journey in Elkdom on June 27, 1963 when he was initiated into the Biddeford-Saco Elks Lodge #1597. He quickly became active in the Lodge becoming the Lodge’s Tiler in 1964, and eight years later he advance to the position of Exalted Ruler (Lodge President). He continued to actively serve his Lodge in many capacities, and for his efforts was recognized as the Lodge’s Elk of the Year for 1979-1980.

His work was noticed by the Grand Lodge, and in the following year (1984-85), he was appointed as District Deputy Grand Exalted Ruler. He was quickly appointed to serve on the Grand Lodge State Associations/Lodge Activities Committee from 1984-1994.

Also in 1984, Amos was instrumental in developing the partnership between the Maine Children’s Cancer Program and the State Association. Shortly thereafter, the program became the state’s major project.

In 1994, he was recognized by the Maine Elks Association; receiving the Rowland “Duke” Morgan Elk of the Year award for the State. Also that year, he was appointed as Special Deputy Grand Exalted Ruler to oversee the State of Maine, and elected to the position of Grand Trustee, serving a four-year term until 1998. He served as Vice-Chairman of the Grand Trustees from 1997-98.

In 2003, he was elected as the Grand Exalted Ruler of the Benevolent & Protective Order of Elks. As the National President, he and Barbara traveled throughout the country to meet with members in all 50 states.

In the years following his service as the national president he became the State Sponsor of Maine and New Hampshire, and served on the Elks National Veterans Service Commission and as a Trustee of the Elks National Foundation, affectionately known as the “Great Heart of Elkdom.”  He also served as a member of the Grand Lodge Advisory Committee, serving as its chairman in 2010-2012. He also served as an advisor for the Grand Lodge Drug Awareness Committee and Hoop Shoot Committee.

An award was established at the State Association for the highest scoring boy competitor in the State Hoop Shoot.

Amos was devoted to his own family, as well as his Elks family. He served the Order with distinction until the time of his death in 2016.