Maine Highlights from the Grand Lodge

On Monday, July 4th, the assembled Grand Lodge of the Benevolent and Protective Order of Elks conducted the first business session of the 157th Grand Lodge Session.  Among the business conducted this day was the nomination and election of the order’s leadership team for the Fraternal Year 2022-23. 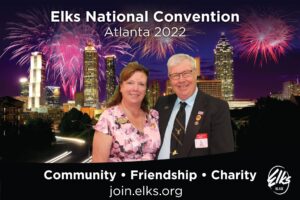 Elected Grand Exalted Ruler for this coming year was Bruce A. Hidley, of Watervliet-Colonie, NY Lodge No. 1500.

Also elected were two members of the Board of Grand Trustees, including our own Past State President Wayne D. Cotterly of Augusta, ME Lodge No. 964, and Joseph C. Cooper of Lakewood Ranch-Sarasota, FL Lodge No. 2855.

In addition, nine Elk lodges will be celebrating their 100th Anniversary during the Fraternal Year 2022-20, including the members of Sanford, ME Lodge No. 1470, which was instituted on June 28, 1923. These excerpts were taken from the daily Convention Newsletters, to see what else has been happening in Atlanta this week go to https://www.elks.org/convention/newsletters.cfm