Skowhegan-Madison PER Ronald Voisine passes away 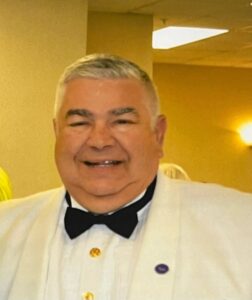 Fairfield- Ronald A. Voisine, 69 of Fairfield, Maine, passed away June 12th, 2022, at home peacefully with his family by his side due to Congestive Heart Failure, Diabetes, and Kidney Failure. Ron was born on November 6, 1952, as the son of Arthur J. “Foxy” and Ursula C. (Vigue) Voisine. He graduated from Lawrence High School in Fairfield, Maine in 1971, where he was an outstanding supporter of all sports and clubs. He participated in football, basketball, and baseball. He was voted as Class Officer and voted Mr. Lawrence High School. Ron graduated from the University of Maine Farmington with a bachelor’s degree in Mathematics, Physics, and History at the secondary level in 1975. He was a member of Phi Sigma Pi and Betta Gamma Honor Charter.

Ron worked for the Maine Central Railroad in the Engineering Department as a Trackman in the 1970’s. Throughout his life he enjoyed raising livestock and haying. He especially enjoyed cattle auctions.

After graduation he was employed as a teacher and coach of all three subjects at the Carl B. Lord School in Vassalboro, Maine for 10 years. Within the years at the Vassalboro school he was a member of the Teacher Association as acting President and Negotiator, where he received the CBL School Teacher of the Year. Upon transferring to Lawrence High School (LHS) MSAD #49 in Fairfield, Maine he taught History and Math and coached Field Hockey, Basketball, and Softball. He initiated the first P.A.L Field Hockey program in 1993. In addition, he was an ASA Softball and US Field Hockey official. During his 30 years of teaching at LHS. In 1996 he received the Who’s Who Among American Teacher’s Award. He was a member of the Social Studies and Mathematics Council. He also had several certifications from UMF, UMA, Colby, and Thomas College.

Beyond his teaching and coaching career, he worked as a Personal Financial Analyst. He was the Emcee, Cook, Public Relations, and Bouncer at the famous Fox Den Dance Hall. Ron was very supportive of the Skowhegan-Madison Elks Lodge #2531 for 48 years as a charter member. He was active in many committees of Elkdom. He held many officer positions including: Exalter Ruler in 2012-2013 and 2013-2014, was the ER of the Year in 2014 at the state level, and Officer of the Year for 2016-2017. He was also the Maine State Elks Membership Chairman. He was awarded the 2018 Skowhegan-Madison Elks Father of the Year.

Ron was predeceased by his parents. He is survived by his beautiful and loving wife Cathy A. Voisine of 40 years; his two daughters Angela M. Voisine of Fairfield and Jessica L. Voisine of Norridgewock; four grandchildren, Wyatt and Amelia Barnes, Thomas and Jaiden Hebert; three sisters Debbie Plummer, Peggy Gayne, and Pamela Baker; several nieces, nephews, and cousins.

Visiting hours will be from 2 to 4 pm and 6 to 8 pm with an Elk’s service in the evening on Tuesday, June 21, 2022 at Veilleux Funeral Home, 8 Elm Street, Waterville, Maine. A mass of a Christian burial will be on Wednesday, June 22, 2022 at 12:15pm at the Notre Dame Catholic Church; 116 Silver Street, Waterville, Maine. The burial will follow at St. Francis Catholic Cemetery in Waterville.

A celebration of life will be held at the Skowhegan-Madison Elks Lodge #2531,

Those wishing to make a donation in the memory of Ronald A. Voisine to the Skowhegan-Madison Elks Lodge #2531 “Exalted Ruler Scholarship Fund,” that will support graduating seniors in the local area can by sending them to

Arrangements are under the care of Veilleux Funeral Home, 8 Elm Street, Waterville, Maine.