Director of Maine Bureau of Veterans’ Services to Speak at Convention 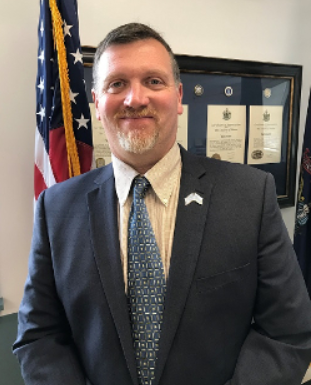 David Richmond is a veteran of the United States Army, serving as an Armor Officer on active duty at Ft. Riley Kansas as a Tank Platoon Leader, a Heavy Mortar Platoon Leader, and a Battalion Adjutant. After leaving active service in 1997, he served in the Maine Army National Guard as an Infantry Officer until 2004, when he completed his final assignment as the Commander of Company B, 3rd of the 172nd Infantry (Mountain) in Brewer, Maine. David began working for the Maine Bureau of Veterans’ Services in 1998, serving as the Project Officer in charge of the design and construction of the Maine Veterans’ Memorial Cemeteries in Augusta, Caribou, and Springvale, and was selected as the Superintendent of the cemetery system in 2002.  In 2016, David became the Deputy Director of the Maine Bureau of Veterans’ Services and was appointed as Bureau Director in 2019. David lives in Jefferson Maine, with his wife Rachael, daughter Olivia, and son Eric.