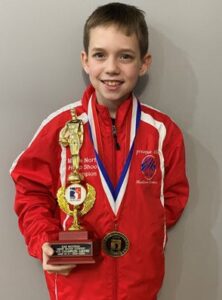 Porter connected on 20 of 25 free throw attempts to finish in a tie with Vermont’s Landon Brown for runner-up honors in the 10-11 boys’ division. Brown then went on to defeat Porter in a tiebreaker. Patrick Wingate of Rhode Island captured the top spot with a score of 21 to advance to the national finals in Chicago April 30.

Porter, the son of Matthew and Billie Porter, was representing Presque Isle Elks Lodge 1954. He had advanced to the regionals by winning at the school, lodge, district and state levels.